Claudia Clark embraces Public speaking and communicates her enthusiasm to audiences –especially when she talks about her favorite topics–politics and history. In an entertaining and educating manner, Claudia provides a well researched and interactive discussion about the pressing transatlantic issues facing the world today.

There were many ways in which one can see the strong relationship between Obama and Merkel–how they referred to one another, the opportunities they afforded one another, and the actual interactions between the two during their working relationship.

In addition to the strength of their individual relationship between the two world leaders, the participants will learn why alliances such as NATO are important and why the wave of populism and isolationism that has become so prevalent is dangerous.

This presentation is NOT a political discussion, but rather a discussion of a friendship and partnership of two key political figures. Participants will learn why the two world leaders established such a strong bond and why they had such a strong chemistry between the two of them. The policies supported and implemented by each leader are secondary–of primary importance is how said policies impacted the relationship between the two leaders.

The Human Side of Merkel

At a discussion before 25 women from the American Association of University Women Munich Chapter I focused on the “human” side of Chancellor Merkel. Because of her ability to remain calm and neutral under even the most dire or joyous circumstances, the German media coined the term “poker face” to describe their leader. One of the most telling aspects of Merkel and Obama’s relationship was the number of times she let her guard down and showed emotion. She fought back tears as she and Obama toured the former concentration camp of Buchenwald together, and as they shared the podium for the last time at their final joint press conference in November 2016. Conversley they laughed and joked with one another as they shared beer and weißwurst together at a breakfast among residents of the Bavarian village of Krün. As one participant of Wednesday nights discussion observed, “Obama had the unique ability of humanizing Merkel—something very few have been able to do.”

On behalf of the board of our Rotary Club Hamburg-International, as well as of the members of our Club, I’d like to express to you our appreciation for the very interesting presentation you gave to us yesterday evening. From the good number of questions you received during the question and answer period, it was clear that the audience was fascinated with your speech and your topic.

Thanks you so much again and best regards,

MY PARTNER,
MY FRIEND 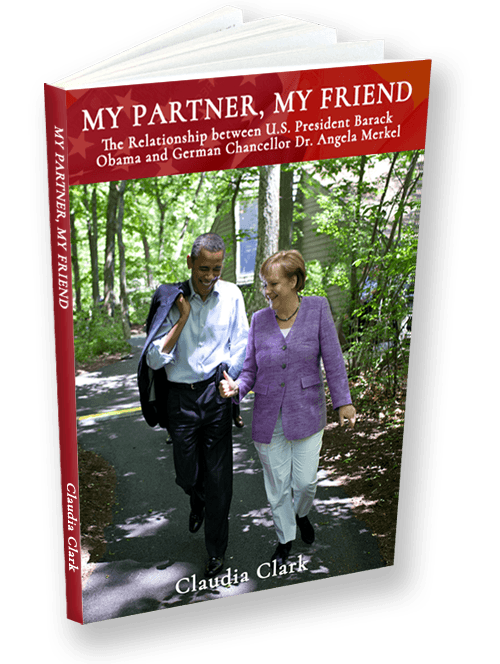 Receive a free chapter from Claudia's book when you submit the form to receive updates.