And Here We Are…May Her Memory Be A Blessing, Ruth Bader Ginsberg 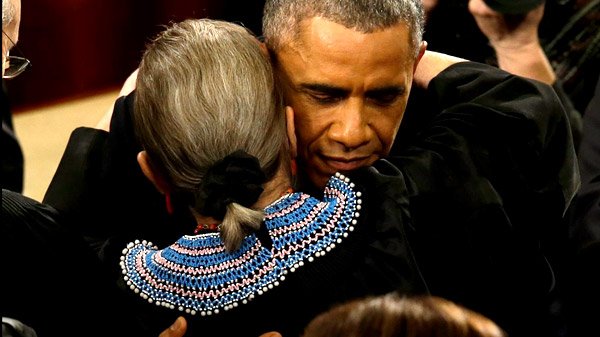 Any political activist knew this day was coming, and had crossed our fingers and prayed to anyone who would listen that her fragile body would hold on just until after the 2021 inauguration, but sadly 87 year old Supreme Court Justice and women’s rights champion Ruth Bader Ginsberg lost her battle with cancer on September 18, 2020. I was in the hospital being treated for what the doctor’s suspected as meningitis when my friend texted me with the devastating news. As I ate breakfast, I told my German hospital roommate what had happened, but trying to explain the ramifications went beyond my basic German skills. As I read story after story of people discussing their tears and sadness over her death, I felt rage. People felt sorry for themselves and for the loss of American democracy and women’s rights all because of Ginsberg’s death. These people were right, so much was at stake, and it was a sad day in deed. However, I was outraged because the fate of women’s rights, LGBTQ rights, and democracy NEVER should have rested on the shoulders of one person, yet alone an 87 year old woman.

Maintaining women’s reproductive rights as a fundamental human right has been something that I have fought for in one way or another since I was 15. Even though research indicates that 65% of Americans believe abortion and reproductive rights should be legal, opponents of abortion rights and women’s reproductive rights had one mission and one mission only– to overturn Roe at any cost. While I (along with my activist friends) realized that these rights were not something we could be complacent about. Nevertheless, the majority of people took these rights for granted and stayed home and did not vote in midterm or special elections, and while they did that, the anti-choice constituency took every opportunity they could to put abortion limitation legislation on the ballots in local, state, and national elections as well as judicial appointments. And the anti-choice people have been working for 47 years for this day, and now the day has come. As an activist who has voted in EVERY single election—special, primary, and general election since I was 18 I am furious with my so-called activist friends who opted not to vote. I am angry with the Bernie or bust people who stayed home or the 3rd party voters in 2016. Clinton was not a perfect candidate– but I knew what was on the line. I understood I was voting for the SCOTUS as much as I was voting for President—especially since the Republicans had hijacked the vacancy of Justice Scalia and refused to allow President Obama to appoint his replacement.

When anti-choice groups placed abortion restriction bills on ballots or before state/federal legislatures, I (along with a handful of other loyal supporters) led campaigns urging people to contact their elected officials/write letters to the editor of papers, organized vigils/protests when limitations on reproductive rights were placed on the ballot. When we sought support, “No, I cannot, but I support your effort,” is what we were often told, and meanwhile here we are now. I escorted women who needed reproductive women’s health services into clinics—many of whom needed services for things such as mammograms/morning after pills after being raped—only to the torment of protesters yelling and screaming derogatory things to them. While I did this, you stayed at home during midterms, or stayed quiet. I worked on an abortion rights campaign and at the end of our shift we often had to have a police escort from our office to the parking lot because of the death threats we had received during the day—in the meantime you took your rights for granted. Now, here we are.

On the prochoice spectrum, I consider myself to be fairly conservative. There are those who believe abortion is a medical procedure just like any other, and it should be treated accordingly, and they do not understand the controversy. I understand the moral dilemma, and I see how it can be interpreted as murder. However, I do not believe it is my place to tell another woman what she must do with her own body—that decision is between her and her physician. I am also practical, I realize abortion is going to happen regardless of whether or not the procedure is legal, and I would much rather if a woman faces an unwanted pregnancy and is going to terminate her pregnancy she does it safely. Under no certain circumstances do I want to see desperate women go back in time where they resort to coat hangers and knitting needles to attempt to end an unwanted pregnancy. It is for these reasons I have put my heart and soul into the movement for so long and why I am so furious at where we are now.

With the upcoming election, the best way to honor RBG’s legacy is to vote. When I hadn’t received my ballot on Monday the 21st, from my hospital bed in Germany, I phoned, emailed, and texted people in the county clerk’s office in California demanding my ballot daily until it finally arrived via email on Thursday, the 24th. When I was released from the hospital on Saturday the first thing I did upon returning home was to fax my ballot to the Santa Clara County Clerk’s Office. I waited 4 years to cast this vote, and NOTHING was going to deter me, and with RBG’s death, that vote seemed even more important than ever.

If I can offer one word of advice from this post, even if we are successful in defeating Trump and his sycophant enablers like McConnell and Graham in November, our work is far from over. We must continue to be diligent to ensure that anti-choice/anti women legislatures stay as far from Washington and state capitols as possible, so that our rights are NEVER EVER placed on the shoulders of one person again.

**For those interested, I wrote my history master’s thesis degree on legitimate abortion providers in the Pre-Roe Era. I discuss their legitimacy, why they decided to participate in illegal actions, and what it cost them. Here is the link where you can download it for free.