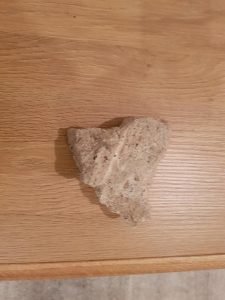 My piece of the Berlin Wall

I did not realize how growing up in the United States during the Cold War impacted me until my first trip to Berlin in 1990. Children in America would often toss around the phrase “it is a free country” quite loosely in daily conversations or confrontations. One day when I was eleven or twelve my step dad asked me if I really knew what that phrase meant. I ignored him, but I never forgot those words.

On the historic Thursday night in November 1989 I had watched and cheered as the Berlin Wall had come tumbling down from my living room thousands of miles away in Michigan. However, it was not until my first trip to Berlin nearly a year later that I really understood the significance of that event, but more importantly the meaning of “living in a free country.” It was the second week of August, 1990 when my mom, my step dad, and a friend of mine got off the train from Frankfurt in Berlin. By this point, it had been approximately 9 months since the wall had fallen, but there were many sections of the Wall still in tact. The differences between the former East Berlin and West Berlin were so evident — even to a young, naïve 17 year old American girl. As I looked around and took in the sights of my surroundings, I was shaken to my core. I understood what it was like to arrogantly proclaim “it’s a free country”. Even though the wall was down, and the German people were once again reunited and free, I understood the danger of taking the freedom we had in the United States for granted. Fortunately for me, there were large pieces of the Wall that visitors were allowed to break, so I chipped my own piece of the Berlin Wall, which to this day, is my most prized possession.