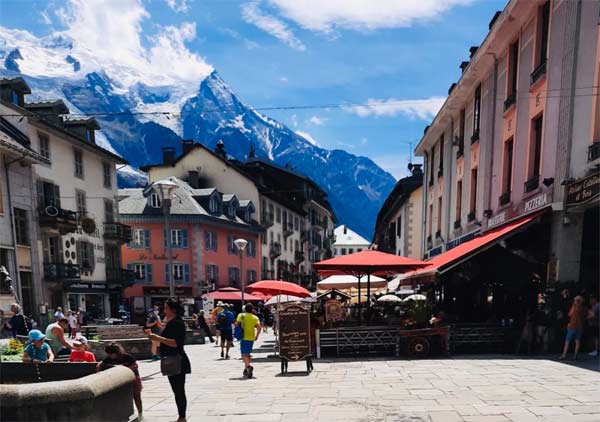 This July my husband and I celebrated our 25th wedding anniversary and because I am an avid animal lover–especially koalas and kangaroos, we had planned for 5 years to go to Australia. Unfortunately, because of the Coronavirus outbreak our trip had been cancelled, so we decided to travel to France, the town of Chamonix and the Mont-Blanc mountain, which is the Haute-Savoie region.

My husband had already requested the time off from work, and we had the space reserved for our two dogs at the the Hundepension (dog kennel), we decided to use that time to travel someplace else.

We moved from United States to Germany in 2017 so we could travel more, and there was still a lot of Europe we hadn’t seen. I absolutely adore the mountains and have seen the German, Austrian, and Swiss Alps, but we had never seen the French Alps. My mother was a former French teacher, and I had 15 years of French over the years, but never spent any length of time in France-besides a few days in Paris. We decided since we had the time and opportunity, 2 weeks in the French and Swiss Alps would be an appropriate alternative to Australia and New Zealand.

The charming French commune Chamonix initially rose to international fame in 1924 as the first host of the Winter Olympics. Located in the Haute-Savoie department of the Auvergne-Rhône-Alpes region of France between the peaks of the Aiguilles Rouges and Aiguille du Midi.

Chamonix is one of the oldest ski resorts in France. Besides skiing, other outdoor adventures such as rock climbing, parasailing and kilometers of hiking paths should satisfy the requirements of outdoor adventurers of any level. If you are like my husband and me who traded our outdoor sports equipment for computers many years ago– have no fear there are plenty of restaurants/cafes/lookout points fully accessible by one of the multiple cab cars where one can go to enjoy the breathtaking beauty of the French Alps.

History: The history of Chamonix dates back to the 11th century, when Count Aimon I of Geneva gave the valley to the monastery Sacra di San Michele. The first tourist development began at the end of the 18th and beginning of the 19th century.

We began our 2 day/3 night adventure by exploring its quaint old town. True to many European cities, several churches and cathedrals appeared on the sights to see list.

Given the fact that we had limited time in Chamonix and churches are not “our thing” we limited our sightseeing to one Catholic (St. Michel’s Catholic Church and one Protestant (Eglise Reformee Arve Mont-Blanc).

Since architecture and art history are the two classes I would have failed faster than a physics class, I often admire churches and cathedrals from afar, and take a couple of photos, but seldom do I explore the inside.

Other highlights of our city tour included the historical Monument Communal and the Chamonix Cemetery. Over the course of our travels, we have seen a fair number of cemeteries.

People may ask what is so special about a cemetery in the middle of a small city in France? The small, quaint cemetery was impressive with the beauty of the mountains and rolling hills in the background that serves as the final resting place of many mountaineers from around the world who attempted to climb Mont Blanc with tragic consequences.

As we wandered around the streets of old town, we noticed that the weather looked ominous and decided if we wanted to see the famous Le Brevent mountain, we needed to do it sooner rather than late.

The magnificent south-facing mountain rocky summit rises to a staggering 2,525m above sea level. The impressive mid station at 1,999 m can be accessed either by foot on a zig-zaggy path known as Vertical Kilometre or the Plan Praz gondola. Given the hot 30C and humid July weather, we opted for the gondola.

For a round trip of 34 Euro for adults, we took the two tiered system to the top. Normally, the cable cars stop running at 6;00, but due to technical difficulties earlier in the day, the company made allowances for return trips as late as 8;00. I must say I was pleasantly surprised that the company made allowances and was flexible enough to ensure guests had ample time to explore the sights.

In addition to the walkways, and lookout points, there was also a restaurant where people could enjoy a meal, grab a cup a coffee, or a quick snack while enjoying the breathtaking views. It was truly an amazing way to end our first day in Chamonix.

We began our second day in Chamonix with a 13 kilometer/30 minute train ride to Montvers / Mer du Glace (glacier)- From the train depot, there is a short gondola ride which drops you off at the top, with approximately 500 stairs you must take to the bottom. Along the way, signs are posted giving a visual indicator at just how much the glacial has receded over the years. 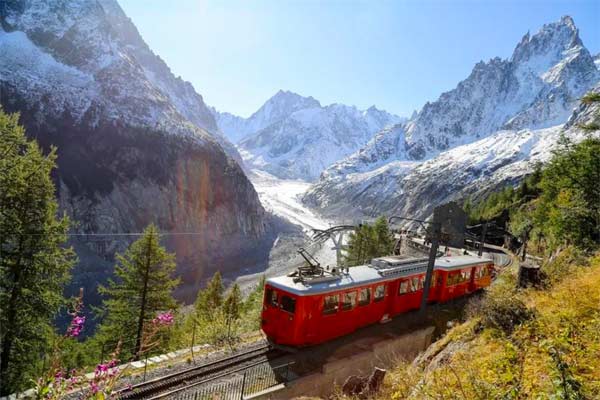 Once you reach the bottom, you have the option of touring an Ice Cave (highly recommended) before beginning the long truck back up the 500 steps to the gondola. The scenery was beautiful and worth the cost/effort, but in another 30 degree day, we are extremely thankful this adventure was the first item on our agenda for the day.

We returned to Chamonix around 12; 30—just in time to grab a quick lunch before we headed for our next mountain adventure– L’Aguille du Midi In another 2 tiered cable car adventure (totaling approximately 20 minutes one travels (1035m) above Chamonix and experience some of the most majestic sites around fly over the forest to reach le Plan de l’Aiguille in 10 minutes (2317m). On your right, the Glacier des Bossons, in front of you the Mont-Blanc (4810m), on your left the Aiguille Verte, the Drus and the Aiguilles de Chamonix. Then take a second cable car which, in just 10 minutes takes you up to 3777m, over the seracs, the glacier des Pelerins and the hanging glaciers on the north face of the Aiguille du Midi as you see below. 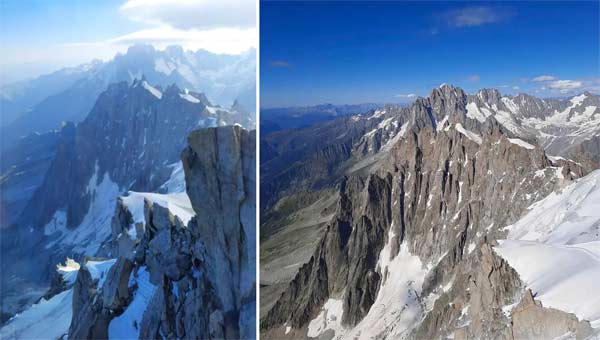 Day 3 our Final day in Chamonix. We began our final morning in Chamonix with one final excursion to Mont Blanc, but in order to get to Mont Blanc, you first need to take the cable car back to L’Aguille du Midi. We arrived at the kiosk for Aiguille du Midi around 8:30. By 9:00 we had conquered the 2 cable cars to get to Aiguille du Midi. We stood in line to purchase an additional ticket for Mont Blanc, and much to our disappointment, the employee informed us the winds were too strong and it was too dangerous, so no cable cars to Mont Blanc at all. Weighing our options of how to spend the rest of our day before heading to Geneva, we walked by the entrance to Le Pas dans le Vide and saw there was no wait, so we nervously joined the short line.

Only open the public since December 2013, Le Pas dans le Vide, or as it has been affectionately nick named “the highest attraction in Europe” is a relatively new tourist attraction.. It is located on the upper terrace of the Aiguille du Midi at 3842 m. From a fully glazed room from floor to ceiling visitors have under their feet, a gap of more than 1000m. From this glass room, people can see the highest peaks in Western Europe—including ,the Bossons glacier – the glacier with the world’s largest glacial drop of almost 3370m (4810m – 1440m).

Although neither my husband nor I are “afraid” of heights, neither one of us is particularly comfortable with them either. I stepped onto the bridge long enough to look down—but not long enough for my husband to take a photo. My husband on the other hand, put one foot on the bridge, and said “that is enough” and we quickly stepped off. I must admit that I felt a little nauseous for several hours after that brief encounter.

As we were recovering from the vertigo, we walked back by the window where they sold tickets to Mont Blanc. The man stopped us and told us that he had been given the all clear, that round way tickets on the cable cars to Mont Blanc were now available. After confirming that we had our passports (Mont Blanc is officially the border between France and Italy) we paid the additional 32 Euros for the tickets and ran to the entrance a few hundred meters.

There we boarded a cable car were we rode he Panoramic Mont Blanc gondola for the 5 kilometers During our scenic ride we passed over the Geant glacier, giving you spectacular views over ice falls, crevasses and the Mont Blanc massif. 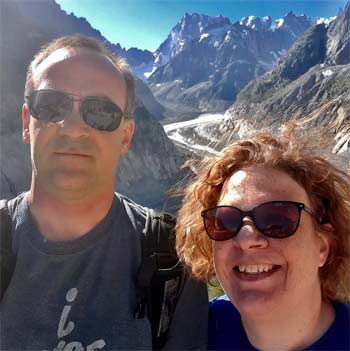 Claudia Clark and her husband are California transplants who moved to Landshut, Germany in 2017 so they could travel more and see more of the Alps Claudia is a writer and her husband is an engineer.

Approximately 45 minutes later when we got off the cable car in Italy, we were greeted with amazing panoramic views, a gift shop, a museum, a restaurant, and an immigration office/visitors center. We spent 45 minutes climbing stairs/going in and out of walkways taking photos, breathing the crisp air, and observing as much as the scenery as we could. Because I am a mountain person, we have seen some of the most beautiful mountains in the world including—the mountains in Alaska, the Canadian Rockies, the Colorado Rockies, and the German, Swiss, and Austrian Alps. I must admit even I was taken aback by just how beautiful this area was. We reluctantly boarded the cable car to return to Chamonix. As we witnessed the sites around us one last time, we talked about how difficult Geneva or Zürich would be to measure up our experiences in the French Alps, particularly Chamonix.

A word about the French Culture

One of the very first things I remember hearing from everyone from my French teachers to other Americans and some Germans, to even my own mother who had lived in Normandy for many years, was that the French are rude , they hate Americans, and they refuse to speak English. I would like to dispel this myth completely. I found the French I encountered to be friendly, patient, and considerate. They offered to speak English when I couldn’t remember the French, or they waited patiently when I told them I wanted to speak French. They smiled knowingly as I often had 2 or 3 languages come out of my mouth in one sentence, and nodded appreciatively as I stated that I was fluent in French, but living in Germany the languages were blurred. I am not sure if it is because they knew I spoke the language, or the stereotypes are outdated, but I would like to firmly state that based on my recent experience, the reputation the French have had over the years is unfounded.