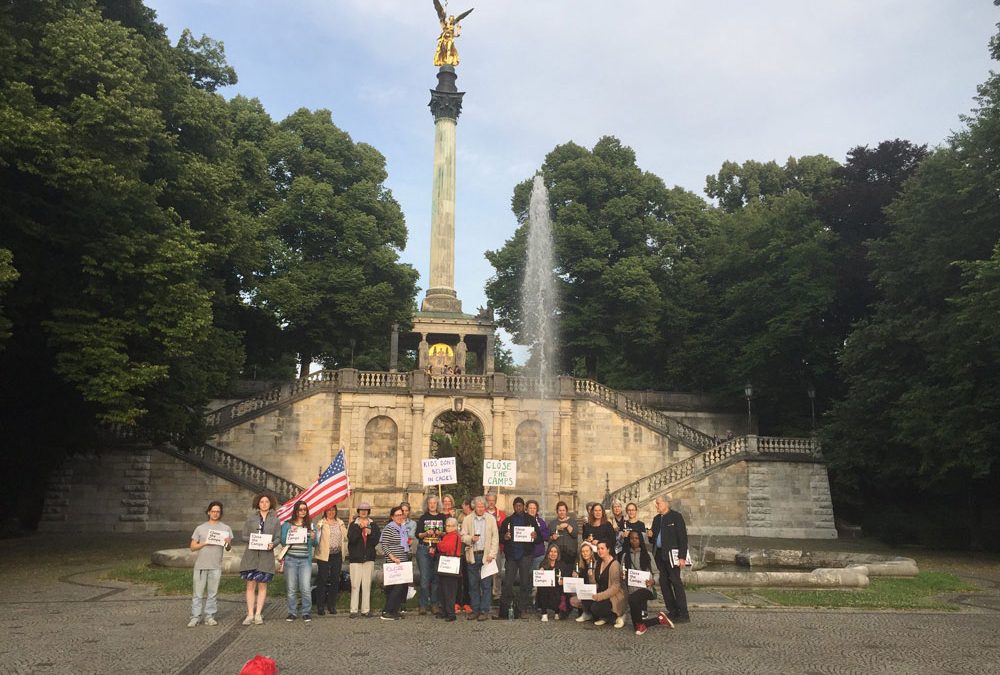 On Friday night, July 12th, 2019 over 800 #Lightsforliberty vigils took place on 5 continents in order to express concern and outrage over the conditions of the refugees at the southern border in the United States. Several cities in Germany including Hamburg and Munich participated as well. This issue had been dear to my heart since the initial atrocities of families being separated at the border a year earlier.

Over the last year, I continued to monitor the news of the conditions in the detention centers and my outrage and disgust grew. On day one of social work school, one of the first things we were told was that we were now officially “mandated reporters”. In everyday language, that meant we were obligated by law to report any suspected signs of any child abuse, neglect, abandonment etc. Failure to do so could resort in expeletion from school, fines, loss of license, loss of job, and possibly even prosecution. As I watched these stories in horror, hearing children being forced to go weeks without being allowed to take a shower or brush their teeth, the oath I took as a social worker ate at me. I felt so helpless. I was expected to report this behavior to authorities, but what do I do when the crimes were being committed by authorities? 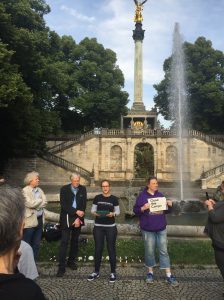 With each news story I grew more and more disillusioned. I wanted to turn the news off, but I forced myself to listen because I figure if these people had to endure these conditions for months, I could listen to the stories for 2 minutes. My physical breaking point came on Thursday afternoon. I was waiting for my German class to begin and I was social media wasting time. I saw the headline that the government was going to begin rounding up immigrants in 10 targeted cities as early as this Sunday. After I saw that headline, I found myself physically sick. I was relieved my German teacher had to cancel class due to a personal reason, as shortly after I read the article I went running into the bathroom where I threw up and cried for twenty minutes. Never had I been so disgusted or ashamed to be an American in my entire life.

I had made arrangements with my friend to meet her at the Munich train station so we could go the vigil together. I saw her standing outside of the Starbucks (our normal meeting point) and I saw she had various items with her. My stomach turned to knots when I saw an American flag was among the various items she had with her. I did not want to be seen carrying a flag –but more than that; I did not want to be closely identified as an American.
The vigil was held in front of Munich’s historic Friedens Engel Landmark. It was a beautiful Friday evening—in front of a public monument, a beautiful fountain, overlooking the scenic city. Tourists were wandering through the area, and even a bridal couple was having wedding photos taken in front of the monument. Being in such beautiful and joyous surroundings it was difficult to put into perspective exactly why we were there.

30 Americans gathered in front of this historic monument on a beautiful Friday evening and shortly after the President of DAG began to speak, it was easy to forget our environment, and become outraged at what was happening in our home countries. In the hour we gathered, we read a timeline of the events of the past year, we light candles, held a moment of silence, and shared stories of how we felt. One woman cried as she talked about being a Mexican American woman whose parents had never had as much as parking ticket be classified as “rapists and murders” by the current president. Another participant talked about the fact that until the issue of global warming and climate changed were addressed, people would be forced to flee their countries in search of ways to earn a living, and the refugee situation would only continue to worsen. I expressed the emotions I felt the other night, including vomiting from the news of ICE raids beginning this weekend.

While the feelings of the evening were of anger, and disgust, we also talked about what we could do. We emphasized that just because we lived overseas, we were not helpless. Through ongoing vigils, and communicating with friends and family back in the states, we could make our voices heard. Most importantly, we are still eligible to vote, so we need to not only vote, but hold our elected officials accountable. These detention centers are able to continue to operate because they are funded by the government. The most valuable takeaway of the night is that we CAN call our Congress Members and insist that we do not want our tax dollars to support these centers. Additionally, we can encourage our friends and family members in the United States and across the world to call as well. We have a voice and we need to use it. If you wonder how you can help, take 2 minutes to call your member of Congress and tell them to stop funding these detention centers.