My Challenges with German 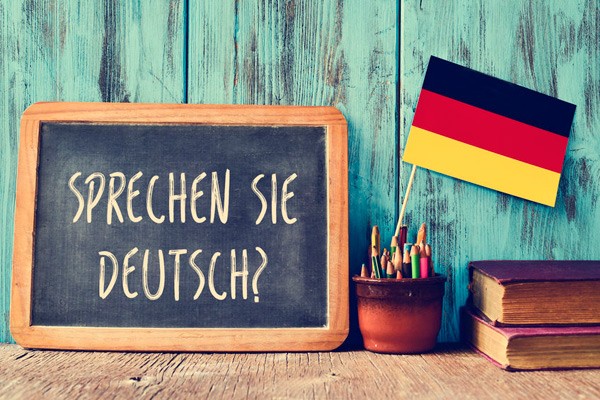 From the moment I stepped foot on German soil in August 1990, I fell in love the country, the people, and the culture. What I did not however, fall in love with was the language. Even though I am a bleeding heart liberal, the one area I tend to side with conservatives on, is the issue speaking the native language. Unlike most of my liberal peers, I believe English should be the official language of the United States, and people who live in the U.S. should learn to speak English. Similarly, I felt that if I were going to live in Germany, I should learn to speak German.

My mother had been a former French, Spanish, and English teacher, so in 7th grade I began to study French (unfortunately German was not offered until college) I was not the gifted linguist that my mother was, and I struggled with it. It was not until many years later that I was diagnosed with a form of dyslexia where the test administrators informed me that was why languages were so challenging for me. Nevertheless, through a lot of frustration and effort I became fluent in French. By the time I reached college, I figured I had invested so much energy in French that I may as well become fluent, so I opted to minor in it. During my sophomore year of college, I made the mistake of scheduling an 8:00 (2nd year French class) and 9:30 German (1st year) class. I think my poor German professor learned more French than I did German, as he would ask me a question in German and I would answer him in French. It did not help that this happened Fall Semester of 1992—my first presidential election cycle where I could actually vote. I was president of the College Democrats, and I was more concerned about making President Bush a one term president than I was about any of my classes, but most specifically German. I did not put forth the amount of energy and time necessary to learn a new language, yet alone a challenging one like German. Yes, German is every bit of challenging as people claim it is. I took the class credit/no credit, and I remember anxiety of opening my report card as I feared I was not even going to pass the class. Hence, my inability to learn German I feared would hamper my long tem dreams of moving to Germany.

Then after living in California for many years and working as a community organizer, I found it necessary to learn Spanish, so I took classes at the local community college, and had on the job training. With the accessibility of the Spanish speaking community in California, I quickly became fluent in it, but I still wanted to learn to speak German.

Many years later, I decided I would give German a chance again. I had hoped my initial problems with the language was because I had not put in the necessary amount of effort to learn the language. My husband and I began languages classes together, and much to my disappointment, my struggle was not from lack of effort, but simply not understanding the language. The right opportunity came about and we moved to Germany—despite not being fluent in the language. We are now living in Germany, and continue to struggle in my German classes, but I have learned that the locals are appreciative of people who at least attempt to speak the language, and are more than willing to help. In fact, many are willing to exchange German classes for English lessons.

One of my earliest memories is when my mother introduced me to the famous movie the Sound of Music. I was probably no more than 5 the first time I saw the movie for the first time, but I distinctly remember seeing Julie Andrews wandering around the mountains of Salzburg, Austria in the opening scene being fascinated and claiming that I would live there someday. Hence began my fascination with Bavaria. Of course it did not hurt matters that my uncle whom I absolutely adored had been stationed in Germany throughout most of my childhood, so my fascination continued. During the summer of 1990, the summer before my senior year of high school my mother, my step dad, and a friend made our first trip to Europe. It was a whirlwind 21 day trip—a couple of days in England and Wales, a couple of days in Paris, but most of the time was spent in Germany and Austria .

My uncle was stationed in the Frankfurt area, so it was a hike even on the train into the southern region of Germany (Bavaria) and into Austria. I remember being so hypothesized by the beauty of the Alps and thinking the area was even more beautiful than what I had seen in movies and photos. I became even more determined to move there someday. I had fallen in so much in love with the region, that I had initially planned to major in international Relations in college in hopes of getting a job with the state department so that I could live in this region. Unfortunately, I do not take standardized tests well, and the foreign service civil exam was notoriously difficult—so much so that just the thought of taking the exam deterred me of my dream of working for the state department—at least at that point in my life.