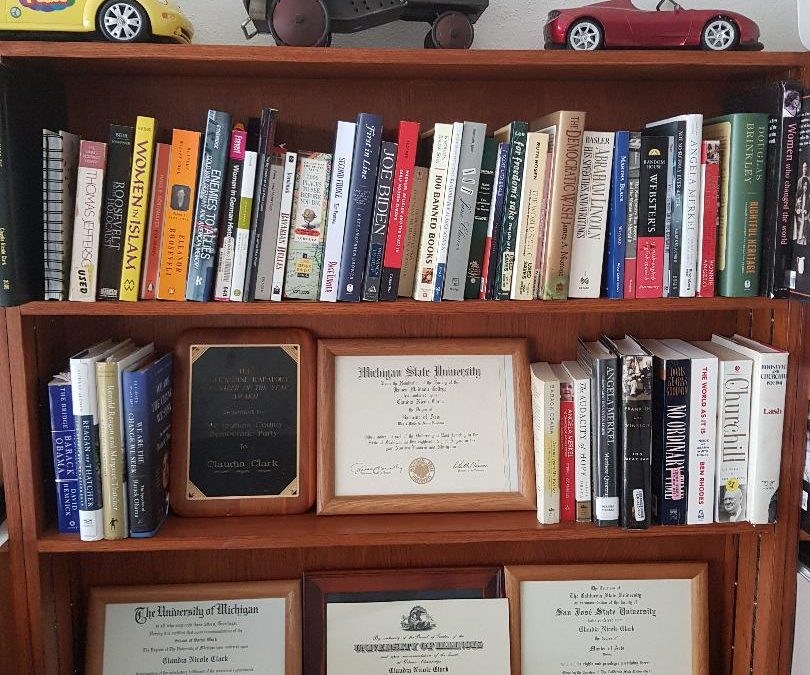 In my previous post about my challenge with German I mentioned in passing my learning disability and my ADD. However, it played an important enough role in my life that I believe it warrants a post of itself. I really struggled in school from a very early age. However, I did not let that deter me from working hard. In fact, I often sacrificed typical teenage activities (like prom) for my school work. Like most people with learning disabilities, my grades/test scores never reflected the amount of effort I put forth in school.

High school is challenging enough for most kids, but add a learning disability and when I was fifteen my mother was diagnosed with breast cancer, so I spent my sophomore year taking care of her while she was undergoing chemotherapy. I was never a really strong student to begin with, but during this period my grades slipped. I did ok in my liberal arts classes, but math was extremely challenging for me. Despite having a tutor 3x a week, I barely squeaked by my first year algebra class with a D. I did so poorly in Algebra, that one day in front of the entire class my Algebra teacher said, “You are the dumbest student I have ever had in my twenty years of teaching.” I was so humiliated that it was many years before I said anything to anyone (even my mom or my other friends) about the remarks.

Fortunately, I have a very stubborn streak and there is nothing I like more than proving people wrong. Even though I had done “well” enough in Algebra that I did not need to retake it, I hated having the D on my transcript, so I decided to go to summer school and retake the class. Summer school is notoriously more challenging than the regular semester and I knew that, but I wanted to give it a try, and with an amazing teacher, in a much harder class I turned that D into an A. Because I had not technically failed my class, the school would not replace the original grade on my transcript, so it had no impact on my GPA, but I wanted to show to the world that I cared enough and was competent enough to redo something and could succeed. Not only that, but in later years I managed to earn a B in multiple graduate level statistics classes.

Unfortunately, my algebra teacher’s remark was not unique. The next year when I was struggling so much with my geometry class that my doctor insisted I drop the class my high school counselor told me that “Michigan State is the only college who will accept you without geometry and even that is because they will take anyone who pays the $20 application fee.” This time, I did complain to my mother, who called the school. I was pulled out of my French class and called into the Assistant Principal’s office where he apologized, but that was the end. I was not reassigned another counselor, and sadly I never received an apology from the counselor—not even when I showed him the 4 Big Ten college acceptance letters I had received.

Truthfully I did not want to go to college because I hated school so much, but I knew that was not an option in my family, I went to college. I struggled the first two years, but by my junior year when I began taking more history and political science classes (classes that I liked versus general education classes) I finally succeeded, and I managed to make the dean’s list for the first time of my academic career. Now, if you have seen my CV or read the info about me on my website, you will see that I have 3 master’s degrees. You may ask how someone who struggled with school as much as I did and hated it as much as I did ended up with one master’s degree, yet alone three. Well, that is a long story and boring story. I will attempt to sum it up quickly.

I obtained my first master’s degree in Labor Relations since I had hoped to work as a labor organizer and helped people improve their working conditions. When I could not find a job in that field, I went into Human Resources (HR) instead. In the several years I worked in HR, I became distraught at the unethical and illegal employment practices I saw. I saw employers fire people because of their religion, turn people down for promotions because of their age, and look the other way at sexual harassment. I grew tired of having to tell management that those things were illegal, and being told “You are HR find a way to get around the law.” I never knew that having integrity was a liability. The constant struggle created internal havoc on my health, and migraines (that I had experienced since I was 5 years old) grew more and more frequent and more out of control. After a lot of soul searching, I returned to school to obtain a master’s degree in history.

While I enjoyed my work in history, there is little one can do with a master’s in history, and much to my disappointment, I was not admitted into any PHD program. Meanwhile, my migraines became more problematic and I needed to regroup and find a career I so desperately wanted. I finally settled on Social Work with an emphasis on Community Organizing. I worked on some impressive social justice and political campaigns such as an abortion rights campaign, a school bond measure, and some political campaigns during this period. Unfortunately, my migraines continued to be a problem and made it harder and harder for me to work on a regular basis—even part time.

This project has been the first thing in almost 10 years that has helped me give purpose in my life. While I firmly believe this book has been a good step for me moving forward, it has opened many old wounds. As I have received some feedback from various editors, agents, and publishers, some of the extremely negative feedback (and quite honestly unnecessarily harsh) comments, I feel like the 15 year old sitting in algebra class again. However, I believe I have a story to tell, and just as I did not let those teachers and adults deter me then, I am determined not to let people to get the better of me now. Unfortunately it is a harsh world and people can be cruel, and in order to succeed one needs a thicker skin and not let the haters destroy your goals.