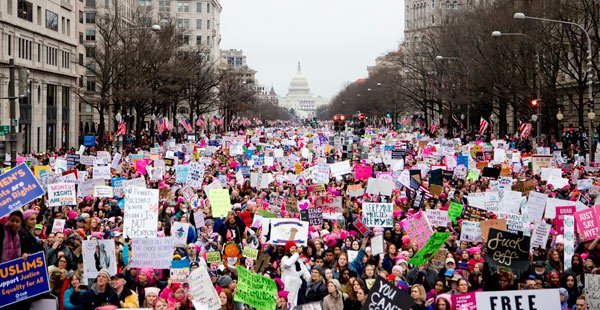 As a lifelong political activist, I find 99% of Trump’s policies and actions abhorrent.  There is no question that both the domestic and foreign policies implemented by the Trump administration over the past four years have challenged the U.S. Constitution and the democratic principles upon which the country had been founded. Nevertheless, besides providing job security to late-night comedy writers across the globe, his presidency has not been a complete failure- his unexpected victory scared Americans into action. The day following his election people took to the streets to protest against his misogynistic and racist rhetoric and have not stopped. Voter turnout in the 2018 midterm elections was the highest it had been since 1914 and democrats and progressives managed to secure key victories across the country as well as taking control over the U.S. House of Representatives. It took the election of a racist, misogynistic, homophobic, xenophobic president for progressives to jump into action to save their country from a wannabe dictator.  Hence, the one positive thing the Trump presidency has done is that it served as a wakeup call to Americans that they needed to become more engaged in the political process to save their country from demise.

As a social justice fighter, I always knew that our rights and democratic principles could not be taken for granted, but rather something that had to be continuously fought for and maintained.  In this capacity,  I not only led organizing campaigns for causes which were important to me- but I also voted in EVERY single election—special, primary, and general election since I was 18. Unfortunately,  I believe progressives are their own worst enemies—they either refuse to vote at all or vote 3rd party because their candidate is not “perfect”. Time again I tell people there is no such thing as a perfect candidate, and I think progressives can be picker about people whom they will vote for than whom they date. Conservatives, on the other hand, are the complete opposite and vote religiously and use those elections to stack the state and federal elections with candidates whose principles align more closely with theirs, but against the values of the majority of Americans.  One can argue that the election of Donald Trump was a symptom of this cycle.  According to a Washington Post reporter 43% or approximately 100 million people refused to vote in the 2016 presidential cycle, [1] while third-party candidates took votes from Clinton in a few important battleground states.  For example, Libertarian candidate Gary Johnson and Green Party nominee Jill Stein managed to secure 5% of the vote in Michigan, [2] and as a result, Trump narrowly secured a victory to secure an Electoral College win.

The day following the 2016 presidential election after it became apparent that Trump had secured the Presidency, spontaneous protests against Trump and his hateful and discriminatory campaign rhetoric emerged in thousands of cities across the country for several days. The most famous and widespread of these was the women’s march.  The purpose of the march had been to unite people and show the world that we were outraged that someone with sexist ideals and blatant disregard for women as Trump could be elected as President of the United States.  Within a few short weeks, what started out as one march, turned into worldwide phenomena with demonstrations occurring on all seven continents—including Antarctica with an estimate of 7 million participants across the globe [3]. While this march was unquestionably the largest, it was only one of many that have occurred in the past four years over Trump’s unconstitutional and inhumane policies. For example, March for sciences began across the country to protest Trump`s belief that climate change as a “hoax created by the Chinese” and thereby routinely cutting federal funding for multiple environmental agencies and regularly deregulating environmental protection measures.  People held demonstrations in airports across the country when the Trump administration implemented a poorly planned and even more poorly executed Muslim Travel Ban.  Demonstrators also showed up in droves across the country to protest the inhumane treatment and the family separation policy of asylum at the southern borders. After the February 14, 2018 mass shooting which killed 17 and injured another 17 in Parkland, the youth started the March for Our Lives movement across the United States.  Led by students, thousands of citizens across the country engaged in multiple marches, demonstrations, and voter registration drives to fight to protect their lives for common-sense gun reform policies. Leah Greenberg and Ezra Levin formed Indivisible, a registered 501(c)(4) nonprofit whose mission, which can be read on their website includes” is to cultivate and lift up a grassroots movement of local groups to defeat the Trump agenda, elect progressive leaders, and realize bold progressive policies. Across the nation, thousands of local groups are using the Indivisible Guide to hold their members of Congress accountable. Not authorized by any candidate or candidate committee [4].” The members take positions on important policies and candidates that they see as a fundamental threat to democracy and they train local citizens how to organize.  Some of their activities include: training people how to contact their member of congress, the steps needed to put together a protest or a vigil, and how to launch a media campaign.

Due in large part to the assistance of momentum built from anger at Trump’s policies and training from groups like Indivisible, progressives managed to secure a landslide victory in the 2018 midterm elections both in Washington and in state races across the country. With the highest turnout for a midterm election since 1914, an estimated 49.3% of eligible voters voted in the midterm election, of which approximately 53.2% of the votes cast went toward the Democrats, compared to 45.1% that the Republicans received [5]. The results were remarkable both in numbers and the people elected.  At the national level, democrats managed to secure 41 seats—a victory they had not seen since the 1974 midterm election following President Nixon’s resignation [6]. In addition to those numbers, two Muslim women (Rashida Tlaib from Michigan and Ilhan Omar from Minnesota) were elected to Congress for the 1st time. Texas voters elected two Latina women (Sylvia Garcia and Veronica Escobar) Kansas voters elected Democrat Sharice Davids as the 1st Native American and lesbian woman, and with Ayanna Pressley’s victory in Massachusetts, Massachusetts elected its first African American woman to congress [7].

Since the 2018 midterm election, progressives have remained focused on the 2020 presidential election, and have not let down their guard. They have continued to protest against the ill-advised/dangerous Trump coronavirus policies.  Progressives have been lobbying their members of congress about the recent Supreme Court nominee Amy Coney Barett. Moreover, it is clear that democrats have been energized and motivated since the 2016 election of Donald Trump. Unfortunately, it took a wannabe dictator and his sycophant enablers to almost destroy American democracy, the United States reputation across the world, and the death of more than 200,000 Americans from a preventable pandemic for progressives to stop taking their liberty and democracy for granted.  There is no question that progressives have worked diligently these past 4 years to restore the democratic principles they believe identify Americans.

The polls show Biden as the clear victor in the election, many fear that Trump will not go quietly, and he will contest the election.  Even if Biden is not your favorite candidate (honestly, Elizabeth Warren was my choice) he is still 100 light-years better than Trump. Moreover, we are not just voting for president, but for the environment, for the SCOTUS, to restore the United States standing in the world, and not to be dramatic, but we are voting for democracy itself. Ignore the polls, and vote in numbers too big manipulate or contest.  Yes, every vote matters, or else the Republicans would not be so adamant in trying to stop people from voting. We can take a couple of days to get the best night of sleep we have had in 4 years, but then we must return to work to secure the stability and integrity of our country.

My biggest concern is that people are so focused on defeating Donald Trump (and a handful of his sycophants like Senate Majority Leader Mitch McConnell from Kentucky and Senator Lindsey Graham from South Carolina) that they believe their work is over and they can rest on January 21, 2021.  Unfortunately, our job only begins on January 21, 2021.  If Trump and his enablers are defeated, we must remain diligent that progressives work to overturn the undemocratic policies and remove unqualified appointees of the Trump administration.  We need to work to ensure nobody like Trump ever gets within 500 miles of the White House ever again. I do not envy Biden should he be elected.  The task of restoring civility in the United States as well as repairing the severed relationships among our allies is going to be difficult and going to take a long time. As an American Expat living in Germany, I was so horrified by how Trump treated our European Allies (especially German Chancellor Angela Merkel) that I wrote a book about the extraordinary relationship and partnership between former President Obama and German Chancellor Merkel and the need for allied nations to be able to communicate and trust each other in these troubling and highly globalized times.  Thus, from an expat perspective, I think restoring the United States standing in the world should be at the top of Biden’s agenda. However, regardless of what Biden and his administration decide to focus on, the one thing that remains certain, progressives must not let down their guard and become complacent.  We have come extremely close to losing our democracy, and we need to work to elect candidates and legislation to safeguard our democracy to ensure this never happens again.  Whether that entails eliminating the electoral college or Citizens United, better legislation for fairer boundary lines for Congressional districts, making voting easier and more accessible, or instituting term limits for federal and Supreme Court judges or members of  Congress.  Of course all of this is moot, if progressives fail to vote.  We proved that we can make a difference in 2018 and we can do it again in 2020, but hopefully, we have all learned a lesson that democracy and freedom are somethings that must continuously be fought to protect.