The Deflector In Chief 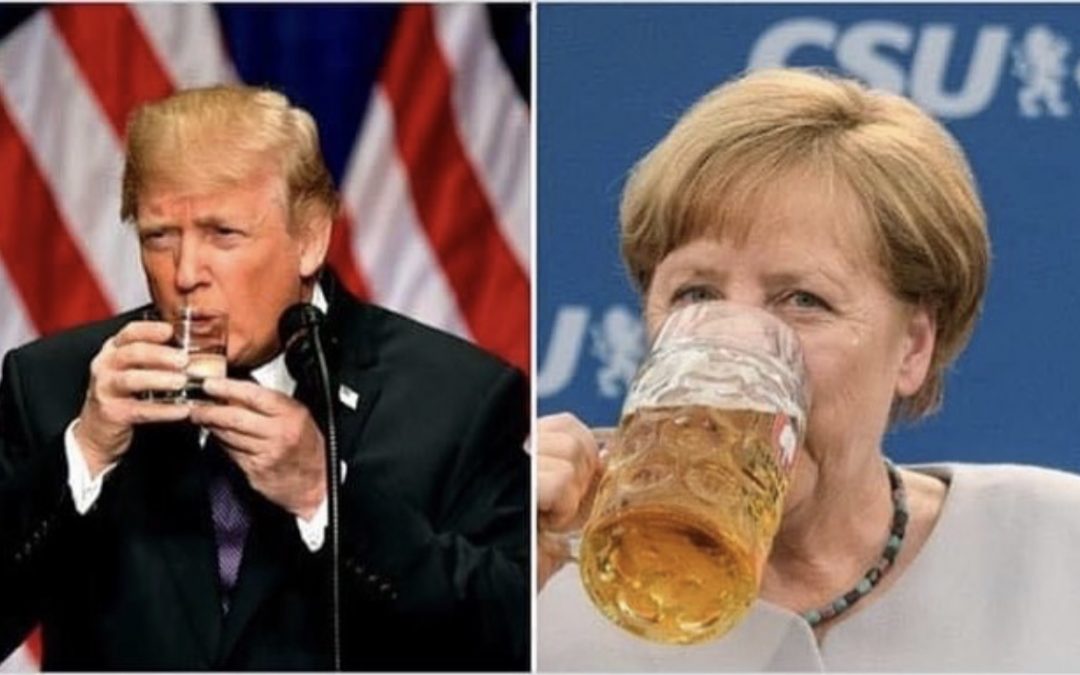 Between my German classes, the ongoing community building I have been doing for my book, and rescheduling my summer vacation because of the Coronavirus I have not had much time to write recently. As I sit down to write this, I am uncertain where to begin. Do I address the systematic racism in the United States, the recent reports of the Russians offering bounties on American soldiers, Trump’s disrespectful behavior toward female world leaders, or do I write about the dismal Coronavirus numbers in the United States? These topics are widespread, but the common denominator in every scenario illustrates a disturbing decline of America on the world stage. Since most of my work involves international affairs and policy, for the sake of consistency I decided to focus on those issues-specifically Russian bounties on American soldiers and Trump’s reproachful treatment toward women leaders. Nevertheless, we are in 2020 and what blog post would be complete without at least mentioning the impact of the Coronavirus, so I will end with a brief discussion on that.

As a liberal political activist, I make no secret of my disdain for many of former President Ronald Regan’s domestic policies. Nevertheless, I try to give credit where credit is due, and living in Germany I cannot help to think that Germany would not be a free and united country were it not for the help of former Presidents Reagan and Bush. Even after all these years, I still get chills down my spine when I hear Reagan’s words, “Mr. Gorbachav tear down this wall” speech. I mention this only because I believe that Reagan would be rolling over in his grave if he could see the damage Trump and the Republican Party have managed to do to the relationship between the U.S. and Russia today. The list of Trump’s alliance with Putin against the United States is endless—the Mueller investigation on whether Trump colluded Russia to interfere in the 2016 presidential election, Trump publicly siding with Putin over his own intelligence officials in Helsinki, Republican Congress members refusing to enact legislation to prevent further Russian election interference, Trump’s endless campaigning for Russia to be reinstated into the G7, etc. While all of these actions are disturbing and concerning, they pale in comparison to recent news that the Russian military had secretly offered bounties to militants in Afghanistan for killing coalition forces — including American soldiers.

The New York Times recently reported that a bounty of $100,000 per American solider had been placed by the Russians. The media also claimed that Trump had been informed about these egregious actions in March 2020, and upon hearing of this damning information, the “president” opted to ignore it and hoped it would go away. When it became painstakingly clear to Trump that the story would not go away he responded in his typical manner. First he feigned ignorance—and claimed he had no knowledge of the actions. When that tactic did not work, he blamed the media for the leak, and more recently he referred to the scandal as a ‘hoax’. Hoax, or witch hunt, one may recall are words Trump uses to describe topics he does not like or which paint him in a negative light. Not once did he demand answers or reassure Americans appropriate retaliatory actions would be taken. Unfortunately, the Republican congress members too have fallen in line with Trump and defended his actions. Some argue that Trump was never informed, while others say the whole thing has been blown out of proportion. In any event, the Republicans continue to make excuses for this president and continue to allow him to commit treasonous acts and disregard the Constitution.

Watching this horror film play out from across the Atlantic, I hear the defenses—either Trump did not know or he ignored it. I really am not sure which is worse. Both scenarios illustrate the gross incompetence of the commander-_in- chief who swore an oath to protect American citizens and the U.S. constitution. There has been no question that Trump has repeatedly violated that oath, but nowhere has it been more blatant than with this new information. Twenty Americans lost their lives in Afghanistan last year, and it is unclear if any of those lives lost were due to the bounties, Americans who lost family members last year in Afghanistan are demanding answers, and the government and the president owe them that.

It is no secret that before he even took the oath of office Trump had problems with German Chancellor Angela Merkel. When he campaigned for President in 2016, he often referred to her refugee policy as “insane.” From their first awkward meeting in the Oval Office in March 2017 when Trump refused to shake Merkel’s hand it was clear that the two would not have the same type of relationship that Merkel and Obama shared. Over the years, their difficult relationship went from bad to worse as evidenced when Trump tossed candy at Merkel across the table at the G7 summit in Ottawa in 2017. The relationship came to a head earlier this year when Merkel refused an invitation to the G7 summit in Washington scheduled for June/July. Merkel had cited concerns about the Coronavirus as her excuse for declining the invitation. However, it was later reported that she had told French President Emanuel Macron that she “didn’t want to be in the room with the guy”. If these scenarios were not bad enough, abruptly following a phone call with Putin , in June of this year Trump announced plans to withdraw 9,5000 troops from Germany. This decision was made so hastily without any consultation with either the Pentagon or the State Department. Putin had lobbied for years for the withdrawal of U.S. troops in Germany, and Trump’s decision to do so was a way to please Putin and punish Merkel at the same time. Once again illustrating Trump’s willingness to alienate trust allies for the sake of satisfying Putin. These actions once again cause sane minded people to ask, “What does Putin have on Trump?” Why is Trump so quick to appease Putin while forgoing decades of trusted alliances?

As if these examples were not bad enough to adequately raise alarm about the deteriorating relationship between the U.S. and Germany created by Trump, CNN published a report earlier this week characterizing Trump’s disdainful treatment with both German Chancellor Angela Merkel and former British Prime Minister Theresa May as “sadistic”. Trump reportedly taunted and disparaged both leaders on phone calls with them calling May “weak” and calling Merkel “stupid” and accused her of “being in the pocket of the Russians”. German sources told CNN that that German officials were so troubled by Merkel’s conversations with Trump that they took extra steps to ensure they remained secret. While extraordinary measures were taken to protect Merkel, she in her typical manner, handled the “president’s” remarks “like water off a duck’s back”. In her rise to power Merkel was accustomed to people treating her poorly and inappropriately, and she shrugged off the insults. Nevertheless, it should go without saying, insulting and bullying an allied world leader is inappropriate, un presidential, and unjustified.

Of course, Trump calling anyone “stupid”, much less Merkel—a woman with a PhD in Quantum Physics is laughable. The only thing more preposterous is for Trump to accuse Merkel of being aligned with Putin—especially given the information that has emerged recently about the bounties offered on American soldiers. My initial response when I heard about these accusations is that Trump was deflecting attention from himself onto Merkel. It is evident he has no respect for intelligent women and he feels threatened by them, so he attacked her by calling her stupid. He knows how entangled he is with Putin and the Russians and he accused Merkel of similar behavior to deflect any attention from himself. This is a tactic Trump knows well and has implemented many times throughout the course of his presidency.

If anyone knows me at all, I tend to be very protective of people whom I love or I respect and without hesitation I will do everything in my power to protect their honor when I feel it is unduly attacked. Therefore, I could not help but join the chorus who tweeted words of disgust toward Trump and words of encouragement for the German Chancellor when I defended my adopted leader when I responded, in a tweet, “Merkel has a PHD in Quantum Chemistry and she speaks 3 languages. She has more intelligence in her pinky nail than you have in your entire miserable body.” Given the numerous memes, and other jokes circulating social media circles, it is clear that in his latest round against Merkel, Trump once again has come out on the losing side.

The last thing I would like to address is the Coronavirus. If people are like me, they would rather talk about just about anything else. Nevertheless, the pandemic still continues, and it impacts me as an expat, I think it is worth mentioning. On July 1, 2020 the European Union reopened its borders to 14 countries including: Australia, Canada, Algeria, Rwanda, Georgia, and Tunisia because those countries had a good handle of the Coronavirus epidemic.

Because the United States has the highest number of COVID-19 cases in the world more than 2.5 million cases, American tourists are not allowed into the EU. Two and a half years ago Trump reportedly referred to people from Haiti and other African countries as “shole” and did not want people from entering the United States from those countries. One could say that in less than four years Trump has managed to turn the U.S. into a shole country that he accused other countries of being.

The presidential election is in five months. Pundits in both the United States and abroad believe that the world can survive four years of Trump, but it is uncertain of what will happen if Trump is reelected. For the sake of peace both in the United States and in the world, it is our responsibility to ensure Trump does not get elected to a second term. Trump has already indicated that he is not going to go quietly with his hints about getting appointed for life, and challenging the legitimacy of voting by mail methods. For the sake of the entire world, Joe Biden needs to be elected in such large numbers there is no way it could be disputed. We owe it to ALL our citizens—whether they are people of color, members of the LGBTQ community, Dreamers, first responders, military members and their families to elect a President who will uphold the oath they took to protect U.S. citizens from all enemies foreign and domestic and to uphold the Constitution. Additionally, our allies such as Canada, Germany, and France deserve to work with a President who treats them respectfully and understands the importance of maintaining amicable and strong relationships with the rest of the world.