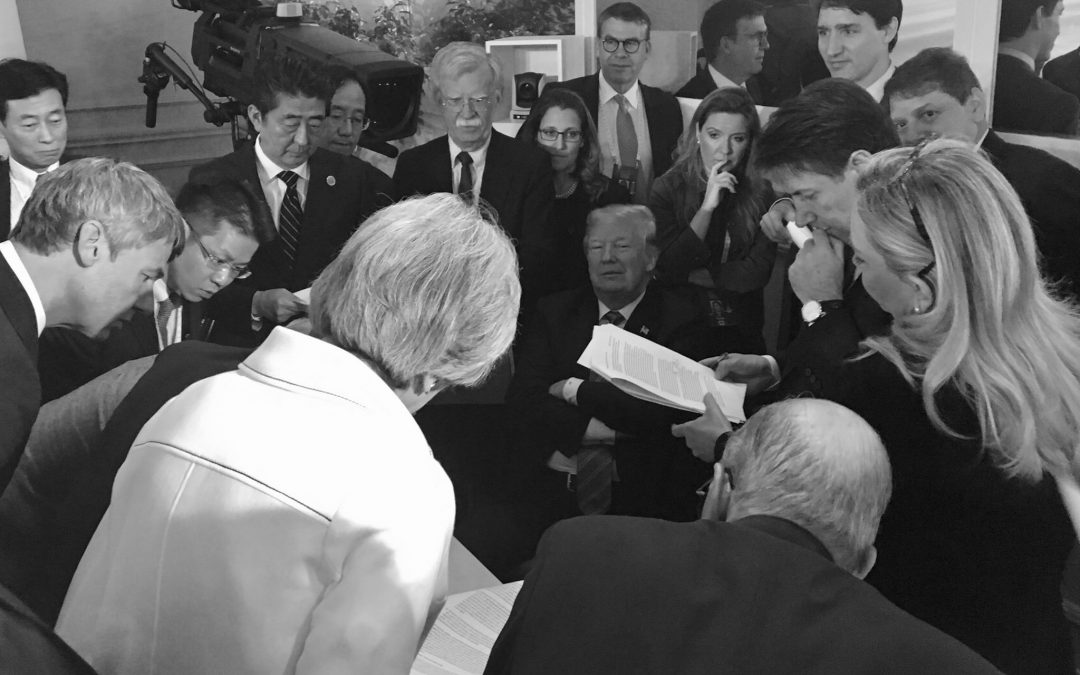 Comprised of the largest and most powerful democratic nations, The Group of Seven (G7) has existed in one form another since 1975. Since taking office in 2017, U.S. President Donald Trump had made it known that that maintaining decades of peaceful alliances with allied Democratic nations was not his number one priority. In fact, some of the “highlights” of last year’s summit in Canada included Trump withdrawing his support of the Joint Communique at the last minute, and throwing Starburst candy across the table at German Chancellor Angela Merkel. In order to avoid a repeat performance from the previous year, this year’s host, French President Emanuel Macron, made this historic announcement ahead of the meetings that for the first time in over forty years, no Joint Communique would be issued.

According to Macron, “I know the points of disagreement with the U.S. If we draft an agreement about the Paris (climate) accord, President Trump won’t agree. It’s pointless.” 1 One can safely say about Trump is that his behavior and attitude toward the other allied nations is unpredictable at best, and this summit proved to be no different. In fact, following Trump’s behavior at the G7, pundits began to refer to the summit as the G6+1 indicating that Trump had removed himself so much from discussions that he really was not a participant.In a weekend full of anticipated fears, the U.S. President did not disappoint or surprise the world in some of his moves. One of the biggest points of contention between the Trump administration and the other G7 leaders involved the issue of readmitting Russia back into the G7. Although Russia had not been part of the original group formed in 1975, they were officially invited to join in 1997 because of their tremendous economic and financial weight.

Their admittance officially changed the name of the G7 to the G8 where it remained until 2014. The other leaders of the G7 voted unanimously in 2014 to indefinitely suspend Russia from the G8 after its illegal annexation of Crimea. The Group reverted to its original G7 name, and in 2017 Russia announced its permanent withdrawal from the G8. The decision to expel Russia from the G7 was a coordinated effort by the world leaders of the remaining 7 countries to punish Putin for violating international law when he illegally annexed Crimea. Merkel had been one of the leading proponents of their expulsion. All remaining G7 countries remained united in their belief that Russia would remain outside—until they returned Crimea. However, the one dissenting vote was the United States. As early as the eve of the 2018 G7 Summit in Canada, Trump had expressed desire in allowing Russia to return. “Russia should be at this meeting” Trump said Friday in Washington before leaving for the two-day summit here. Whether you like it or not, and it may not be politically correct, but we have a world to run… They should let Russia come back in.” 2 For reasons unknown to everyone, for over a year, Trump began to lobby for Russia to be invited back into the G7. As hard as he pushed for their return, G7 leaders pushed back. To them, Putin had violated international law, and therefore had no place at the G7 with other leaders of democratic countries. However, Trump continued to push, and it just so happens, the words he issued in 2018 only served as warm up for the performance he demonstrated at this year’s summit in France.

Historically, despite political and ideological differences, it is uncustomary for politicians to attack presidents/administrations on foreign soil. In an unprecedented move Trump, in his effort to plead that Russia belonged back in the G7, he blamed the former President for Russia’s actions. According to Trump, the invasion infuriated former President Obama because Trump believed Putin had outsmarted President Obama” and thereby Obama insisted on expelling Russia was retaliation.3 These remarks of insulting a former president on foreign soil are not only unprecedented but outright untrue. The decision to expel Russia was the decision ALL of the G7 leaders made together after Putin violated international law and illegally annexed a sovereign nation. Trump’s continued support of dictators like Putin over the actions and beliefs of democratic world leaders and allies continue to illustrate the divide between the United States and the rest of the free world. It is because of actions such as this, that some believe the next G7 should be discontinued and only resumed when Trump is gone. “Even the most basic goals of the summit—leaders taking photos and agreeing to a joint statement to show unity of purpose among democracies—are impossible with Trump involved. 4

Ever since Trump withdrew from the Paris Accord, other world leaders were aware of Trump’s noncommittal to combatting the global issue of climate change, but with the intensity of the forest fires in Brazil burning at unprecedented pace, Macron insisted in making climate change a pillar of their discussions. In fact, the French President scheduled a special climate conference on Monday to address the issue. Nevertheless, Trump could not even be bothered to show up for the meeting. Photos and video clips show an obvious empty chair that had been reserved for the U.S. President.

Interestingly enough, Trump’s spokesperson argued that he had a schedule conflict—a meeting with German Chancellor Angela Merkel and Indian Prime Minister Narendra Modi , both of whom were coincidently at the Climate Meeting. Understanding the political delicateness of the situation, President Macron downplayed Trump’s absence in a joint press conference with the U.S. President. “He wasn’t in the room, but his team was” 5He further added that he and Trump had had a “productive “discussion on the fires in the Amazon.” With the United States withdrawal in decades old alliances, its role as leader of the free world has become questioned. Moreover, since Merkel announced her plans to retire in 2021, people have wondered who the new leader of Europe—or the free world would be. Macron, as the host of this year’s summit, demonstrated sage leadership and political wisdom in both how he handled the conflict with Trump and the raging fires in the Amazon. It can be argued that his actions have demonstrated he has the leadership and knowledge to carry on as the international diplomatic leader for Western democracies.