What is a GOTV Coordinator? 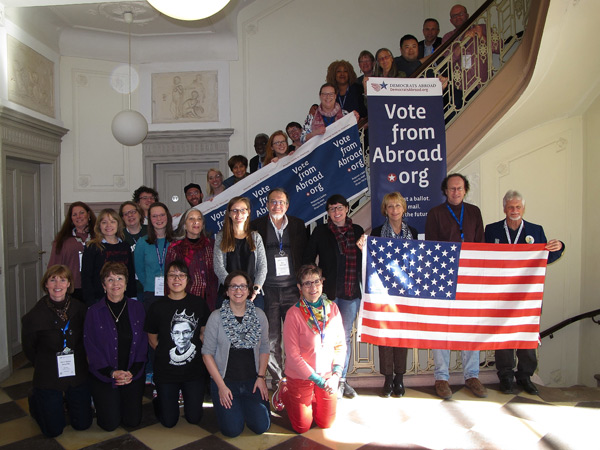 February 23 and 24th 2019 DAG (Democrats Abroad Germany) held their annual meeting in Heidelberg, Germany where among many things they elected their officers and executive/steering committee for the next 2 years. Besides the traditional President, Vice President, Secretary and Treasurer Roles, the steering committee also comprises of a press coordinator, a communications coordinator, and a role that is unique to political campaigns and that is a Get out the Vote (GOTV) coordinator. I am excited to announce that I have been elected to serve in this role for the next 2 years—through the 2020 presidential election. It is a huge responsible and honor, but one I am certain I am ready for since I have worked on various GOTV campaigns in multiple states for multiple candidates and ballot initiatives, but never on a national level before, but with the amazing support from the other ExCom steering committee members, I am certain I am up for the challenge.

Now, GOTV is a term that is used often in political and campaign circles, but it is a phrase that may be unknown to people outside of the political world so I will explain what it is, and what my role will be.

In a Democratic society where people vote for representatives to make laws, everything comes down to the person who wins is the person with the most vote. Hence, the campaign season generally consists of 2 phases. The first phase normally begins several months before an election where field staff (usually overworked, poorly paid staff) identify supporters of a particular candidate or issue. This is done a variety of ways, but the most common ways of identifying supporters or voters is by phone banking or canvassing (going do to door). In both of these activities, voters are identified as either supporters/undecided/ or opposed to said candidate. The remaining of the campaign cycle normally consists of persuading the undecided voters to your side. This work generally occurs over a period of several months. This work is done so we can effectively target our supporters to ensure those people vote. People who oppose the candidate are taken off the lists, as we only concerned with ensuring our supporters vote.

Then, usually a week or 2 before the election (or when early voting begins) the field staff switches gears and rather than attempting to persuade and/or identify voters who are likely supporters, to ensuring these people vote. Again, these efforts are usually done by phone banking, and canvassing. During this phase of the campaign, sleep deprived field staff and volunteers call or visit all the voters identified as supporters earlier in the election cycle to remind them of the upcoming election and remind them about the importance of voting. These conversations usually consist of reminding voters of the upcoming election, where their polling location is, and answer any election related questions. Since it is imperative that everyone we had identified as a supporter votes, we offer any services we can (such as offering rides to the polls) to ensure these people successfully cast their ballot.

Now that you know what GOTV stands for and what it entails I will explain what my new role and responsibility will be in Germany. Voting is a 2 step process. Step one involves ensuring every eligible person is registered to vote. Step 2 is then assuring that every registered voter in effect votes in said election. Keeping this information in mind, my role is 2 fold: helping to register new voters in Germany and then making sure they vote in the upcoming election.

Any American citizen is eligible to vote—even if they are living abroad. It does not matter if they are serving in the military station abroad, married to a non-American and hence living abroad, or a college student on a study abroad program, as long as certain criteria is met (that various by state and it is our job to explain that interested people) they can vote. Since expat life is often a revolving door with people serving in the military, or coming over to work on a 3 or 4 year work assignment, or a college student, there is a constant flow of new Americans entering the country who are eligible to vote from abroad. It is our job as members of Democrats Abroad to find and identify these people and helps them register to vote. Because many people are unaware of this right, or uncertain of how they can register from overseas, we identify places where Americans might congregate and we set up tables and tents and offer assistance.

For example, there are many festivals across Germany including the world famous Oktoberfest in Munich and the Wurstmarkt in Bad Duerkheim where members of DA will go to find eligible unregistered U.S. voters to help them register to vote. Since many universities have study abroad programs, we will work with the universities at setting up voter registration stands to register new voters among the student population.

Since Germany is a large country, and there are Americans living all over Germany, and I live in Munich, I cannot be everywhere. It is my responsible to find and train GOTV liaisons from other DA chapters across the country (including Berlin, Bonn, Hamburg, Heidelberg) to find local universities, festivals, or other events that might attract Americans and ensure new people are registered to vote.

Everything I have mentioned involves registering new people, but there are also multiple thousands of Americans who are already registered to vote, so I need to work with the various chapter chairs across Germany to ensure those people vote as well.

Since I am only one person, and Germany has 16 chapters across the country, a large part of my role is training other volunteers to serve as GOTV liaisons for their said chapter. In my role, I serve as a point of contact, problem solver, and “go to” person for any problems with GOTV other people have.

And again, just as with any other GOTV campaign, in addition to registering new voters, my job is to ensure these people vote. Hence, we run phone banks, so I along with the international GOTV coordinator (located in Canada) the President of DA Germany, members of the DA steering committee and chapter chairs work on writing phone scripts, and train volunteers to phone bank. Then, it is the usual 2 step process—same as if one lives in the U.S. We will identify voters, and then as the election gets closer, we phone them to ensure they vote on Election Day.

Whew it is a lot of work, and a lot of responsibility but one of the most rewarding parts of the political campaign cycle.