Why this election is so important to me, a first time voter: 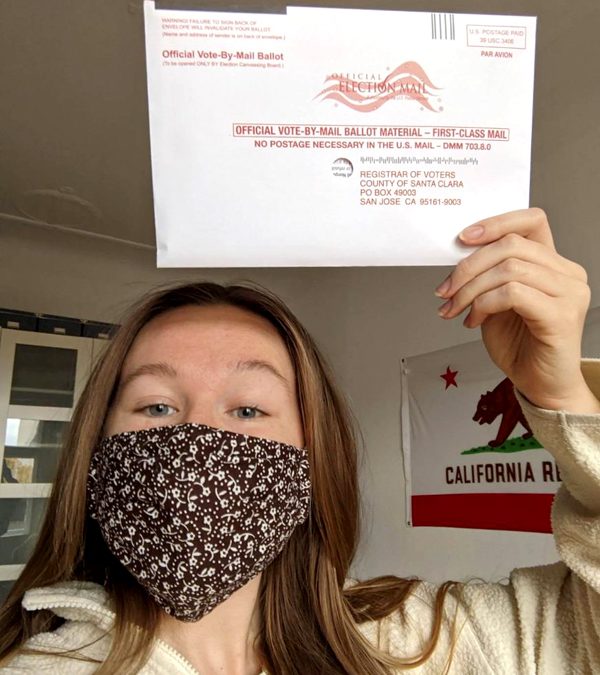 Think back to the first time you voted in a presidential election. What was it like? Did you vote in person? What was going on in the world at that time? People argue that the 2020 election is the election of a lifetime. Being eligible to exercise my right to vote for the first time is a big deal to me– especially while being abroad, during a pandemic, and with an administration that seems to be dividing America more than ever. With so much at stake, I am excited my first vote is so important at such a historic time.

I was born in San Jose in 2000 to German parents that had moved to Silicon Valley during the big tech boom. Because I am fortunate enough to have dual citizenship, my university studies in Germany are basically free, so I decided to leave California to attend college in Berlin in 2018. Even though I have been in Berlin for 2 years, I still get the same reaction today that I did two years ago when I tell people that I am from the United States (although I try to say “I’m from California” to minimize the damage). It starts with a surprised look and an “Oh, you’re from America?”comment, to which, I say “yes”, waiting for a reaction. Then, the cautious but polite “But you don’t support… You know…” “No no!!” I’ll say defensively, “Of course not, I think he is terrible!” To which the German looks more than a little relieved. Sometimes I’m asked how Trump was elected in the first place, but then I shake my head instead of trying to explain the complicated electoral college system. The worst, though, is when people ask if I voted in that election. At the time of the 2016 election, I unfortunately was too young to vote, and thereby ineligible. Now, four years later, I’m more than happy to say I can finally cast my vote and make my voice heard. Having to defend my American roots is a game I can hopefully put an end to this November.

Because Berlin is the capital of Germany and a very politically active city, there are demonstrations for many political causes in front of Brandenburg Gate, every weekend. Like a lot of the Gen Z population, climate change is the most important political issue to me, so I often take part in the Fridays For Our Future demonstrations that occur. I believe that working to reduce global warming is the only way we will have a habitable planet in the future. This is something that has always been important to me because the movement addresses wealth inequality, ethical worker’s rights (in regard to fast fashion/farmers), and racism as well as climate change. All of these issues will continue to harm our planet if there is no real leadership in our government. From pulling out of the Paris Climate Agreement to loosening regulations on toxic air pollution, the Trump administration has been making it harder to win the fight against climate change. For me, the worst part is having a president who simply won’t listen to science or the facts. Although I had been skeptical of Trump’s commitment to take climate change seriously for many years, his dismissiveness on the issue became overwhelmingly clear a few weeks ago following a California wildfire briefing. In this encounter Trump stubbornly insisted things would “cool down”. When the reporter challenged Trump by saying, “I wish science agreed with you.” Trump dismissed the reporter and replied, “Well, I don’t think science knows, actually”. These dismissive words more than any other, reflected his unwillingness to take scientists and climate change seriously. Any leader, yet alone the supposed leader of the free world, should set an example. No leader is expected to be an expert on every issue, but a strong leader should know their limitations, surround themselves with experts and act on their advice – even if the data or expert opinions are contrary to the personal beliefs of that leader.

Although my parents have lived in the United States for 23 years, they have maintained their German citizenship. I asked them once why they have hung onto the green card for so long, to which they responded ‘just in case’. Just in case of what? Well, I guess just in case of a situation like the current political affairs. They love their life in California, but another 4 years of Trump might make them think twice about staying in the United States. That is another reason why it’s so incredibly important to me to vote. I have the power to make my voice heard, while my parents don’t. I want to make sure they get the America they fell in love with 23 years ago.

My first time voting will not include a typical booth at my local voting station or one of the little ‘I voted’ stickers. Since I am abroad and the United States Postal service is (due to the current administration) unfortunately not that reliable, I have been encouraged to fax my ballot in. Yes, you read that correctly. FAX. I have never used a fax machine before, and I honestly have no clue how to use one. But best believe I’m going to find out how in order to cast my vote.

Voting in this election is important to me not only because of my family, but for the safety of our people (due to the coronavirus) and our planet (climate change). I want a leader in government that believes in climate change and cares about the future of our planet. I want someone who will listen to his advisors and doesn’t think he is above science. I want a president who I know will make me not be ashamed to be American. This November, I will join 15 million newly eligible voters to make our voices be heard. Some might say that as a generation, we are constantly distracted and addicted to our phones. But that has made us more connected and informed than ever. Just look at the Trump rally in Tulsa that had an embarrassingly low turnout. This was largely due to a TikTok that went viral and encouraged teens to falsely request tickets for the rally. His campaign said that one million requests had been made, but only 6,000 people showed up thanks to many teens. While sometimes polarizing, our connectivity has made us (Gen Z) more aware of the issues going on in the world. We are constantly bombarded with information, but more informed than ever. I am excited to see what the impact of young people on this election will be.